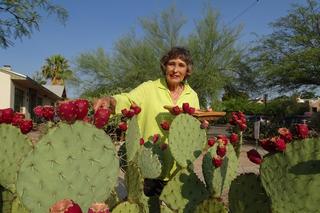 Thank you for stopping by my Web site. On the left of every page are links to my books where you can find a description, the Table of Contents and reviews of each of the books. Click on the title and you'll find the full description.

When Tucson was named America's first UNESCO City of Gastronomy, I knew the story behind the story was mine to tell.  I've been writing about the food of the Southwest for more than four decades, and this new book incorporates everything I've learned over the years and lots of new information. The book traces the influences of Native American, Mexican, mission-era Mediterranean, and ranch-style cowboy traditions. It is a food pilgrimage, full of stories and recipes stretching back to the earliest residents of the Santa Cruz Valley. You'll read how the earliest farmers first learned to grow corn beginning in 2100 BC, where the Hohokam built elaborate their elaborate irrigation canals, and how the arrival of the Spanish changed everything.

More than 100 photographs show everything from  the edible wild plants that fed the earliest inhabitants to pictures of today's kids learning to grow food at school. You'll meet some of Tucson's farmers, small-scale food entrepreneurs, and chefs from restaurants to food trucks who are dedicated to growing and using heritage foods. You'll even visit beer brewers who are using local wild foods to give a local flavor to their beer. There's even a short Epilogue on how Tucson's food community is responding to the pandemic. So happy my editors let me sneak that in last minute--it's an important part of the story.

Read the book, try a Tucson restaurant or two, and you'll agree it's fair to say, "Tucson tastes like nowhere else."

Available online, but  consider asking your favorite independent book store to order for you. They'll love you for that!

The four-acre Mission Garden has garden plots, orchards, and fields from many eras in Tucson's history. You can talk a short walk with me through the garden in this video.

New Southwest Cookbook back in print

I'm thrilled that The New Southwest Cookbook is back in print after being unavailable for a few years. This is a compilation of recipes from the top restaurant and resort chefs in the Southwestern United States. These well-trained chefs took a new look at our traditional ingredients and combined them in new and tasty ways. This is the cookbook I use when I cook for company and want to make something a little different. The recipes are not too difficult for the average home cook.

There's always something new to explore and to write about and it can't wait for a book. I share a blog with four other Southwestern food enthusiasts. We take turns writing through the month on edible wild plants and herbs, traditional agriculture crops, garden products, bees and chickens, and local spices. If you wish to learn more about the exciting world of Southwest cuisine, please join us here. I've known most of my blogmates for years, but every week I learn something new from them.

To read the blog, click on this link: Savor the Southwest: Forage, Raise, Cook

Talks for Your Group

I am available to give talks and demonstrations related to my books.

A Desert Feast: Celebrating Tucson's Culinary Heritage. Learn why Tucson was named the first U.S. UNESCO City of Gastronomy. A lively lecture will take you through 6,000 years of food history, from the first hunter-gatherers who roamed through the Santa Cruz River Valley to today's chefs who incorporate Tucson's heritage foods into their menus. You'll see how both children and adults are learning to garden and how local food manufacturers are using the area's produce to craft distinct products with the taste of Tucson.

West of Paradise: Exploring Southeastern Arizona is a great guide for anyone who loves the Southwest or is ready to begin exploring this exciting region. I am available to give a talk and slide show on the wonderful sites in Southeastern Arizona to groups of 50 or more.

The Prickly Pear Cookbook, The New Southwest Cookbook, and Cooking the Wild Southwest all feature delicious recipes from top resort and restaurant chefs for both wild foods and regional domestically grown foods. Great new ideas for the age-old questions of what to have for dinner tonight. Would your group like a cooking class?

I'll Go and Do More: Annie Dodge Wauneka, Navajo Leader and Activist, was a finalist for the Willa Award. Now Keeping the Rope Straight the middle reader's version, is available from Salina Bookshelf. I am available for a talk entitled "American's Native American Women: The Ordinary and The Extraordinary," which includes a discussion of Annie Wauneka's life. 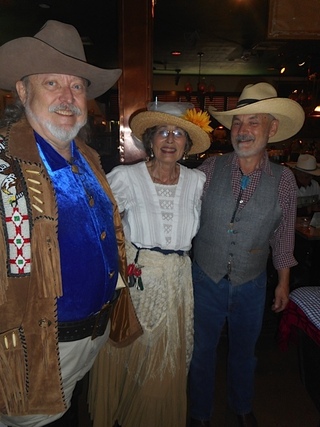 Carolyn with a few tough hombres.