I'll Go and Do More

I'll Go and Do More is the story of Annie Dodge Wauneka (1918-1997), one of the most well-known Navajos of all time, an indefatigable, passionate, and controversial woman who some have called "a one-woman Peace Corps for the Navajo." A daughter of the popular Navajo leader Chee Dodge, Wauneka spent most of her early years herding sheep and raising nine children. After her father's death, she entered politics and was often the only woman on the Navajo Tribal Council during the quarter century she served. When tuberculosis was ravaging the Navajos, she got the white doctors and the medicine men to cooperate to get the infected people into hospitals for treatment.

She conducted a weekly radio show in Navajo and drove thousands of miles across back roads to visit hospitals and remote hogans, then she flew to Washington to buttonhole members of Congress to make sure they understood the issues surrounding Indian health care.

The title comes from the fact that whenever Annie Wauneka was given an award - and she received many - she would end her thank you speech with something like, "Now don't think that because I received this honor I'm going to stop working. I'll say to myself tomorrow, I've got to get up and go and do more."

Peterson Zah, former Chairman and President of the Naajo Nation, has said, "I highly recommend reading I'll Go and Do More, especially for American Indian women who hve goals and aspirations of becoming a leader in their community. Dr. Annie Wauneka was a special and unique individual who lived ahead of her time."

PART 1: FATHER AND DAUGHTER
1. An Illustrious Father
2. The Family Sheepherder
3. The Agonies of Stock Reduction 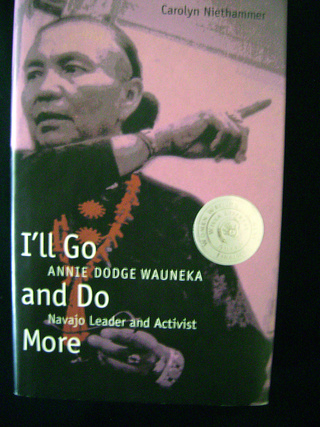 The silver sticker indicates that the book was a Willa award runner-up.
Book Sense
Barnes and Nobel online

Here's what reviewers have said about I'll Go and Do More:

"...a fascinating portrait, an accurate, intriguing biography of the feisty leader who helped redefine the Navajo people...I'll Go and Do More shows the author's deep love for the American Indians." - Arizona Daily Star

"...a must read for individuals who are interested in history, women's studies, American Indian studies, or an inspirational story."
- Multicultural Review

"(the author) is to be commended for producing an excellent biography of one of the most outstanding Native Americans of the Twentieth Century."
- The Indian Trader

"Carolyn Niethammer has done an excellent job with this well-written biography. ...this is an important book and it will help give Annie the recognition she so richly deserves." - The Journal of Arizona History

"...Niethammer provides a vivid portrait of Wauneka, carefully documented but also analytical. (This biography) will stand for many years to come." - Journal of American Ethnic History